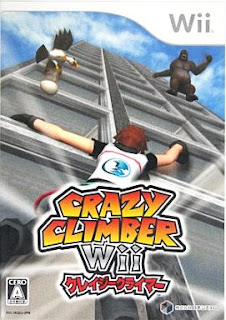 Description / About This Game :
Crazy Climber made its debut in the early 1980s in the arcade. The concept of this innovative game is simple, the player takes on the role of a skyscraper climber and aim to board the helicopter at the top of the building. Although the concept is simple, the game itself is very challenging as there are many obstacles that you have to overcome to reach the top. Window shutters open and close to break your hand holds, residents of the building attempt to kill you by throwing flower pots and other heavy stuff at you. And as you climb higher and higher, you will come across monsters that are living on the buildings and think it’s fun to swing themselves at you and see you drop to your death.